”— But the question is if not young Erik Rosenius topped it all with his splendid bass voice as the Turkish dimwit Osmin. Genuine and beautiful bass voices are in short supply among Swedish men – here we have a real star in the making!”

Erik Rosenius (born 1992), bass, studied at the University College of Opera (UCO) in Stockholm, where he graduated in 2017.

Since 2014 he holds a bachelor degree in classical singing from the Royal College of Music in Stockholm.

Erik is working at the International Opera Studio at Staatsoper Berlin 2018-2020. He is also part of Barbara Hannigan’s Equilibrium Young Artists Program where he sang Father Truelove on tour with “Rake’s Progress” all over Europe in 2019 and as a soloist in Mozart’s Requiem in Munich the same year.

He participated in the new commissioned opera ”Det går an” at Läckö Castle Opera in 2016. He sang in the production of Berlioz’ ”Beatrice and Benedict” with the same company in 2015.

Erik started singing in the Stockholm Boys’ Choir at the age of 8, and studied at the renowned choir school Adolf Fredriks Musikklasser where he had the opportunity to participate in the children’s choir at the Royal Opera in Stockholm in the performance of ”Tosca” (2004). He started his studies in classical solo singing at the gymnasium Södra Latin with Ove Petterson as his teacher 2008. Later, Erik met with the opera bass Lennart Forsén, who became his teacher for some years.

His studies began at the Royal College of Music in Stockholm 2011 where his teacher was Eva Larsson-Myrsten. In 2013, Erik was soloist in a new commissioned chamber-opera at Norrlandsoperan, Umeå and later the same year he sang concerts with the Swedish Chamber Orchestra.

2014-2016 he studied at the University College of Opera in Stockholm with Robert Hyman as his vocal teacher and got acquainted with several roles: Colline in ”La Bohéme”, Don Magnifico in ”La Cenerentola”, Falstaff in ”Die lustigen Wiber von Windsor, Osmin in ”Die Entführung aus dem Serail”, title role in ”Attila”, Sarastro in ”Die Zauberflöte” and Don Alfonso in ”Così fan tutte”. He sang Le Spectre in ”Hamlet” at the UCO concert at the Royal Opera House in Stockholm 2016. In Erik’s last year at the school he sang Fünfter Jude in ”Salome” in a production at the Swedish Royal Opera and portrait Superintendent Budd in ”Albert Herring” as the final exam production at UCO.

Erik has participated in numerous masterclasses, for example at the Sibelius Academy, Lied-course for Gustav Djupsjöbacka (2013) and at Piteå Summer Academy and Lied-course for Wolfgang Holzmair and Matti Hirvonen. 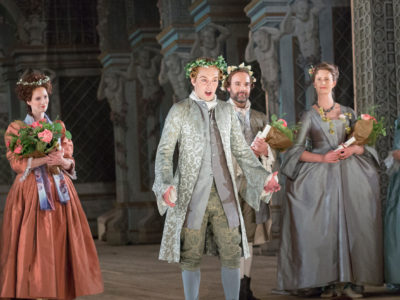 Friends of the Drottningholm Slottsteater scholarship 2019 awarded to Erik Rosenius.